Xiaomi's global expansion continues with UAE now checked, and Saudi Arabia to follow within the month. Dubai-based Task FZCO and local carrier Etisalat with operations in 15 countries have partnered to bring the Chinese smartphone brand to the UAE market.
A number of Xiaomi handsets will be available, starting with the Redmi 2 Pro, priced at AED 449 ($122), and the Redmi Note 2 selling for AED 719 ($196). Higher up the company's lineup, you'd be able to get the 5-inch midranger Mi 4i for AED 899 ($245), or go all-out and purchase the 5.7-inch Mi Note for AED 1699 ($463). 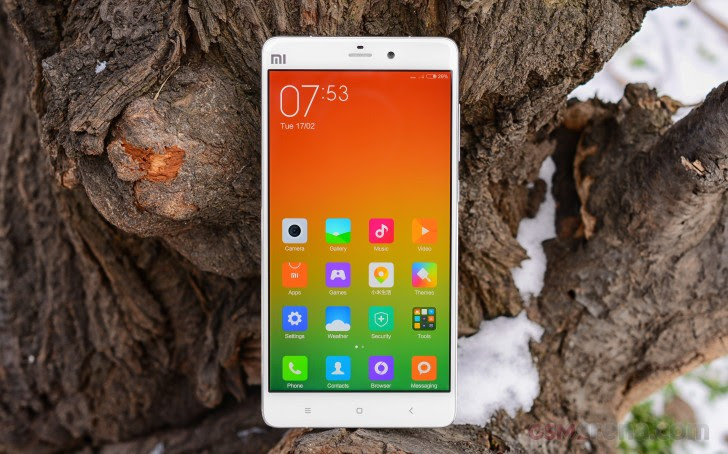 Xiaomi Mi Note
Task FZCO, which has distribution rights for Xiaomi's devices covering the Middle East, has shared plans for expansion to Saudi Arabia, as well. That should take place towards the end of the month, while other countries in the region will need to wait a couple of extra months.
at January 14, 2016 No comments:
Email ThisBlogThis!Share to TwitterShare to FacebookShare to Pinterest
Labels: news, technology

Back in November, Xiaomi announced the Redmi Note 3, which was the company's first smartphone with a fingerprint sensor and a full-metal body. Today, the company announced a different variant of the phone, with a couple of improvements.
The model announced today varies in two ways. One, it replaces the MediaTek Helio X10 chipset with the new Qualcomm Snapdragon 650 with a 64-bit 1.8GHz hexa-core CPU, Adreno 510 GPU, integrated X8 LTE with Cat 7 speeds and support for VoLTE. The device works on all mobile carriers in China and has 4G+ network support.
The other change is the switch from a 13 megapixel camera on the back to 16 megapixels with f2.0 aperture and phase detection autofocus.
Most of the other specifications remain the same, with a 5.5-inch 1080p display, 2GB RAM on the 16GB model and 3GB on the 32GB model, and 4,050mAh battery.
The 16GB model is priced at RMB 999 ($151). The 32GB pricing will be announced later.
If you're reading this in India, then you'll be glad to know that the phone is also coming soon to the Indian market. Pricing and availability information isn't available yet but Xiaomi has started the Redmi Note 3 Explorer challenge in India, where 100 chosen Mi fans will get the phone if they complete the 100 missions. More details will be released later.
at January 14, 2016 No comments:
Email ThisBlogThis!Share to TwitterShare to FacebookShare to Pinterest

Despite HTC's partnership with gaming giant Valve, the Vive VR headset has felt a little short on playable games lately, compared to its competitor Oculus. But HTC has promised that we'll see more of its catalog this month, and we've already gotten a trailer for one of the coolest-looking Vive projects so far. It's called Budget Cuts, a stealth spy game about evading enemies and searching levels using a teleportation gun.
The teleportation mechanic is an increasingly accepted way to move around in VR, seen in projects like Bullet Train. It gets around the motion sickness that comes with artificial walking — although it can be slightly disorienting, something that definitely comes through in this early gameplay trailer.
Budget Cuts is a motion control game, so there's apparently no Oculus Rift support planned before its Touch motion controllers launch. There is, however, a promising postscript to the trailer: "No Oculus Touch support yet, because for some reason the dev kit is hard to get by [sic]. If you happen to work at Oculus, is there any way we can get a hold of it?" Otherwise, it's "coming 'soon'" to Steam and the Vive.
at January 14, 2016 No comments:
Email ThisBlogThis!Share to TwitterShare to FacebookShare to Pinterest
Labels: gaming, news

Square Enix’s Star Ocean 5: Integrity and Faithlessness looks to be what fans hope will be a triumphant return to form for the franchise. Everything we’ve seen of the game so far seems to be something that will be right up the fans’ alley- even if onlookers on the outside are confused about just exactly what the fuss may be.
That continues with this new trailer, that will really endear fans to this new, upcoming game- and will do so in glorious 1080p and 60 frames per second! Truly, we are blessed to have a trailer that doesn’t compromise on these things.
Seriously, though, the trailer looks pretty good, and it also spends some time introducing the game’s protagonist. If this is a title you are planning on buying, then this new video will probably get you excited.
Star Ocean 5 launches in Japan on the PS3 and PS4 in March, and later this year in the west, exclusively on the PS4.

at January 14, 2016 No comments:
Email ThisBlogThis!Share to TwitterShare to FacebookShare to Pinterest
Labels: gaming, news

In a new trailer for "Naruto Shippuden: Ultimate Ninja Storm 4," the fates of Sasuke and Sakura, and Naruto and Hinata, are in the hands of players.
The star-crossed lovers were seen battling it out in "The Last: Naruto the Movie," and it isn't surprising that Banda Namco decided to integrate the bittersweet story into the upcoming game.
The trailer first shows Naruto and Sakura fighting, but Sasuke comes to intervene — unfortunately, he didn't come to save Sakura. He came to take her down. The same is true with the next fight as Hinata intervenes between Sakura and Naruto's battle.
As fans already know, these four are supposed to be lovers (Sasuke - Sakura; Naruto - Hinata). For those who might not be aware of how "The Last" is connected to the recent trailer of the CyberConnect2-developed game, it might not be a nostalgic moment.
Forbes notes that the bittersweet element has always been present in the "Naruto" franchise, and fights between lovers should already be expected. It is even rumored that future games will probably feature a battle between Boruto and his father, to further connote the element of division between close bonds among characters.
Aside from the hot trailer, Bandai Namco also announced that the three first games in the series will be released on PlayStation 3 — a move that will definitely increase fan interest in the fourth installment.
Despite all the good news, fans should remember that the fourth game will be CyberConnect2's last with the franchise. While the previous games developed by the team have proved to be successful, the developer has decided that it's time to end the winning streak with "Naruto." Fans can then expect that future games will probably have a different approach and even a different look.
"Naruto Shippuden: Ultimate Ninja Storm 4" will be released on Feb. 9 for PlayStation 4, Xbox One, and PC.
at January 14, 2016 No comments:
Email ThisBlogThis!Share to TwitterShare to FacebookShare to Pinterest
Labels: gaming, Naruto, news

Overon Studios have released a new trailer for their Unreal 4-powered first-person sci-fi adventure game, Dome City.
Based on the novel of the same name by Hungarian author, István Nemere, Dome City tells the tale of three space cadets that get stuck in the titular Martian city after their very first mission takes a turn for the worst.
Featuring seven minutes of pre-alpha gameplay footage, the new video opens with the game’s protagonists safe on a Star Trek-esque spaceship before moving on to give us a nice long look at one of the three characters exploring the remains of the ruined Martian city.
Promising a vast open world to explore full of tricky puzzles to solve, a narrative with choices that matter, and a score by Alan Wake and Trials Fusion composer Petri Alanko, Dome City is certainly one to keep an eye on.
Dome City is scheduled for release in 2017 on PC, with PS4, and Xbox One versions to follow after.

at January 14, 2016 No comments:
Email ThisBlogThis!Share to TwitterShare to FacebookShare to Pinterest
Labels: gaming, news

Paragon, the upcoming Unreal Engine 4 MOBA from Epic Games, has just released another new trailer for alpha testers. The trailer introduces some new features added into the game, including a death cam, a co-op vs. AI mode and more heroes.

Besides, Epic Games also revealed several new screenshots for gamers to take a preview of this game. You can watch these screenshots below:

It's confirmed that Paragon will enter open beta phase this summer. The game will be launched to both PC and PS4. Interested players can now sign up for the beta on its official website now.