Sailor Moon and her crew of alien-fighting buddies are back! A looming sense of foreboding hangs in the air as Mamoru, Rei, and Usagi sense that this time of peace will be short-lived. An elite high school called Mugen Academy and two of its students, Haruka Tenoh and Michiru Kaioh, seem to be at the center of a recent rash of “reversions,” where victims' bodies are devolving into monsters. Usagi will have to once again resume her role as the Guardian of Love and Justice if she wants to get to the bottom of Juban district's latest threat. Sailor Moon CrystalSeason III is based on a manga and can be found streaming on Crunchyroll and Hulu, Mondays at 10:35 AM EST.

How was the first episode? 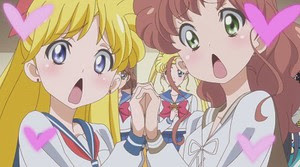 Lynzee Loveridge
Rating: 4
Sailor Moon Crystal had quite a few hurdles to clear for its premiere this season. The first two seasons were part of a delayed, yet highly anticipated revisiting of a show that is nothing short of a cultural phenomenon among anime fans. Those seasons were plagued by slapdash animation shortcuts, uninspired adaptive writing, and a Guardian team that was neutered of personality. There wasn't much goodwill left for Toei Animation's treatment of the show by the end. Many wrote it off as nothing more than a cheap cash grab.
With that in mind, season three is adapting the manga's beloved Infinity (Mugen/Sailor Moon S) arc. It introduces multiple fan-favorite landmark characters, injects the show with a much darker atmosphere, and features Megumi Ogata's Sailor Uranus in a heart-wrenching, dramatic scene at its climax. These are huge shoes to fill.
It's too early to say whether Toei listened to fans' complaints. The premiere episode ofSailor Moon Crystal's first season showed promise when it aired two years ago too. The third season has an all new staff, and there are noticeable changes that hint they want to do right by viewers this time. The character designs are more streamlined, finding a nice balance between the lanky designs from the last two seasons and more rounded forms. Gone are the jarring, plastic CG transformation sequences, replaced by 2D animated sequences that hearken back to the original show. Characters also have actual attack sequences this time, and we're treated to Jupiter and Venus taking out a monster by themselves. At least initially, it looks like the staff are giving the supporting Guardians some of their oomph back.
They also aren't pulling any punches with Uranus and Neptune's relationship either. Admittedly, Junko Minagawa's voice for Haruka is more masculine than Ogawa's, instead of straddling that line that made her seem androgynous. I'm curious to see if the voice will change slightly with Haruka's character design after her actual gender is revealed. In the manga, she looked like a light-haired Mamoru clone for the first few chapters before Takeuchi feminized her design more.
The writing still isn't as tight as I'd like. Even with the first chapter split between two episodes, there's a lot of information covered in this opener, but they make time to let Makoto and Minako be goofy and let Rei tease Usagi. These kinds of interactions are what made the characters endearing, and the last two seasons were practically devoid of anything that wasn't bad-guy plot development.
Director Chiaki Kon has a lot of ground to make up with fans burned out by the first two seasons. She seems to want to do right by the fans this time, and hopefully the TV broadcast versus that weird bi-weekly net streaming means we won't get a double-jointed Sailor Neptune or Sailor Saturn with costume malfunctions.
at April 05, 2016
Email ThisBlogThis!Share to TwitterShare to FacebookShare to Pinterest
Labels: Anime, news