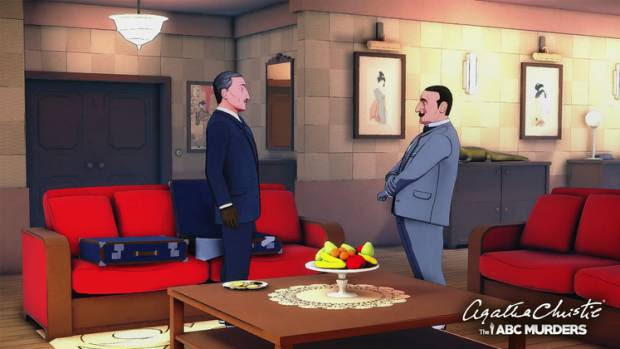 Announced earlier this month, Agatha Christie: The ABC Murders got its first official trailer earlier this week and it goes a long way towards showing us the secrets to how to catch yourself a killer. The video shows off the unique art style in the game, as well as just how you are going to be doing your investigating. The player steps into the shoes of Agatha Christie’s popular Hercule Poirot as he attempts to go through a number of witnesses, knowing that one of them is likely the criminal.
The video shows that the player needs to be able to look through a number of different scenes in order to find clues. Sometimes these clues will be plenty easy to find and other times it appears as though they are quite well hidden and will need a keen eye. There will also be a number of puzzles that will need to be solved in order to gather several different clues. Along the with this first official video, Microids and Kalypso Media released a statement detailing just why they decided to make this game.
“Recognised in the Guinness World Book of Records as the most successful novelist of all time, Agatha Christie specialized in locked room thrillers and classic whodunit mysteries. Her 66 novels, 154 short stories and 19 plays have been translated worldwide into over 50 languages. And Then There Were None, Death on the Nile and Murder on the Orient Express are just some of the many titles that have been adapted for film and TV,” Kalypso Media stated. The companies said that Agatha Christie: The ABC Murders will be available on Steam on February 4 and on the Xbox One and PS4 on February 5. Those who preorder the Steam version will be able to get a 20 percent discount.