Land Rover today announced that the first new member of the Discovery family, the new Discovery Sport will be launched in India on September 2, 2015 and that Land Rover retailers are now formally accepting bookings for the premium SUV in the segment.
The new Discovery Sport, with new levels of refinement, engineering excellence and customer focused design offers the ultimate use of interior space with segment-leading versatility and Land Rover's legendary all-terrain capability.
Rohit Suri, President, Jaguar Land Rover India Ltd (JLRIL), said: "The new Discovery sport is a premium SUV especially designed to invoke the adventure gene in our customers and help them enjoy an active outdoor lifestyle with family and friends, reassured by Land Rover's unparalleled four wheel drive technology. It is a perfect vehicle for people with an unstoppable spirit and passion to explore and discover. The launch of new Discovery Sport in September will mark another significant milestone in the expansion of Land Rover's product offering in India."
The Land Rover range in India includes the flagship Range Rover (starting at INR 183 Lacs in CBU form), Range Rover Sport (starting at INR 116 Lacs in CBU form) and Discovery 4 (starting at Rs 111 lakh in CBU form) and locally manufactured Range Rover Evoque (starting at Rs 48.73 lakh).
at August 11, 2015 No comments:
Email ThisBlogThis!Share to TwitterShare to FacebookShare to Pinterest
Labels: car, news

Xiaomi India on Monday announced MIUI 7 launch premiere in New Delhi on August 19. The Chinese company made the announcement via a tweet, which read "MIUI7 is here! Global launch in New Delhi on 19/8 2.30pm. Join us!" Xiaomi India pointed users to its Indian forum site to register for the event.
While the company is teasing the launch event as global, which means it will be its first appearance outside of Xiaomi's homeland China. We already know that the MIUI 7 will be initially showcased at an event in China on August 13
"Some users might be confused about the MIUI 7 launch schedules. For your information, MIUI 7 China ROM will be introduced in China on August 13, and MIUI 7 global ROM with tailored features for global fans will be unveiled on August 19 in India," said the official forum post.
Apart from the unveiling of the global ROM in India, the company can be expected to showcase its next flagship smartphone or its next-generation Redmi Note device. Teasing the China launch event, the company hinted, "Xiaomi new product launch event is coming on Aug 13, 2015! And it's confirmed, MIUI 7 will be released!"
Based on numerous leaks, the Redmi Note 2 is supposed to include a 5.5-inch full-HD (1080x1920 pixels) display; a 13-megapixel rear camera; a 5-megapixel front camera, and a battery larger than 3000mAh. 4G LTE connectivity is also tipped. Two separate reports claim the handset to feature either Mediatek's Helio X10 (MT6795) chipset or Qualcomm's Snapdragon 410 (MSM8919) processor.
Xiaomi's next flagship Mi 5 smartphone is rumoured to tipped a 5.2-inch QHD (1440x2560 pixels) LCD display with Corning Gorilla Glass 4 for protection; Snapdragon 810 processor; 16-megapixel rear camera; 13-megapixel sensor on the front, and 3000mAh battery. A leak even hinted that Xiaomi's next Mi 5 flagship will come with a built-in fingerprint scanner.
at August 11, 2015 No comments:
Email ThisBlogThis!Share to TwitterShare to FacebookShare to Pinterest
Labels: news, phone, technology

‘Attack on Titan: Before the Fall’ manga has 1.4 million copies in print

The Attack on Titan manga spinoff Attack on Titan: Before the Fall has more than 1.4 million copies in print, Kodansha’s Bessatsu Shōnen Magazine announced over the weekend.
Based on the series of light novels by Ryō Suzukaze and illustrated by Thores Shibamoto, the prequel to the bestselling manga centers on Kuklo, a young man who was found as a baby inside the stomach of one of the fearsome Titans.
The sixth volume of Before the Fall, by Ryo Suzukaze and Satoshi Shiki, shipped Friday in Japan. Kodansha Comics will release the fifth volume in the United States later this month.
Hajime Isayama’s Attack on the Titan, the manga that launched a multimedia phenomenon, has more than 50 million copies in print worldwide; 2.5 million of those are in circulation in the United States.
at August 11, 2015 No comments:
Email ThisBlogThis!Share to TwitterShare to FacebookShare to Pinterest
Labels: Anime

The Live Action ‘Attack On Titan’ Will Be Utterly Horrifying

Japan has endured a ton throughout the years – Godzilla, that croaking phantom young lady from The Resentment, and, most as of late, Avril Lavigne’s woeful “Hi Kitty” music feature. Be that as it may, even the flexible East Asian country may be no match for whatever the damnation is going ahead in this trailer.
In another sneak peak for the Japanese dream activity epic Assault on Titan, the flawlessly pleasant people of Japan are wantonly assaulted by a multitude of exposed, human-eating, and apparently fix goliaths. Look as these murderous mammoths walk through a post-whole-world destroying Japan, eating up the heads of whoever stands in their direction. What’s more, for those panicky about parenthood, there’s likewise a titan, shouting creature child tossed in with the general mish-mash.
Anybody acquainted with the anime arrangement, as of now spilling on Netflix, knows it’s one of the all the more alarming illustrations of the class, to a limited extent on the grounds that the titan animals appear to appreciate chasing and eating up people only for amusement only, and in light of the fact that they have no private parts.
at August 11, 2015 No comments:
Email ThisBlogThis!Share to TwitterShare to FacebookShare to Pinterest
Labels: Anime

One Piece Chapter 797: Biggest Arc To Commence, Return Of Doflamingo?

In One Piece chapter 796, we see what's going on in Dressrosa regarding the Strawhats, Marines, and the other pirates stationed in the King's palace. Former Fleet Admiral Sengoku and Vice Admiral Tsuru make their appearance and chastise Admiral Fujitora about his work ethic regarding the pursuing of Strawhat Luffy and Trafalgar Law.
Surprisingly, we see Fujitora roll the dice as he did in chapter 795 and we see that "fate" has decided that it was time to capture the pirates.
The key detail of the chapter was Sengoku's appearance at Dressrosa. What could that mean in regards to the World Government's relations with Doflamingo and Dressrosa? Could we see stipulations made that will continue to make Dressrosa a pawn of the World Government?
Regarding Doflamingo, YouTuber Alpha2late17 suggested an interesting theory. The theorizer suggested that Doflamingo's alliance with Kaido would be one of betrayal and that the artificial devil fruits are actually bugged with Doflamingo's parasite.
It's an interesting theory considering that there is no way that the Strawhats and Heart pirates will be able to take down Kaido alone. They needed an alliance with hundreds of pirates in Dressrosa solely for the defeating of Doflamingo and his competent crew.
They will likely need the help of another Yonkou, or indirect help from Doflamingo as suggested by Alpha2late17, to take down Kaido.
The next arc will be incredibly interesting considering that alliances will finally begin to make their moves and we will finally see who will be enemies and who will be allies. Considering that the Kid Pirate Alliance will go after Yonkou Red-Haired Shanks, we may actually see some cross-conflict between the Strawhats and the Kid Pirates. After all, Luffy is Shank's protégé.
But will we ever see the Kid Pirate alliance attack the Yonkou? Chapter 795 showed Kaido appearing before them. Will Kid's alliance link with Kaido or will he be crushed by him?
at August 11, 2015 No comments:
Email ThisBlogThis!Share to TwitterShare to FacebookShare to Pinterest
Labels: Anime, One Piece

Toei has posted a series of promos for One Piece's August 22nd's recap TV special Episode of Sabo: The Three Brothers' Bond - The Miraculous Reunion and the Inherited Will. The anime will explore the childhood bond between Luffy, Ace and Sabo, then introduce original material with Sabo's visit to the grave of Whitebeard and Ace, infiltration of Dressrosa and reunion with Luffy from the character's point of view.
Four-member Japanese rock band Goodbye holiday provides their newly-written "Liberator." The band was formed in Hiroshima Prefecture in 2008, then finally made their major debut with 1st single "Kakumei Akatsuki" from Avex Trax on  July 8. 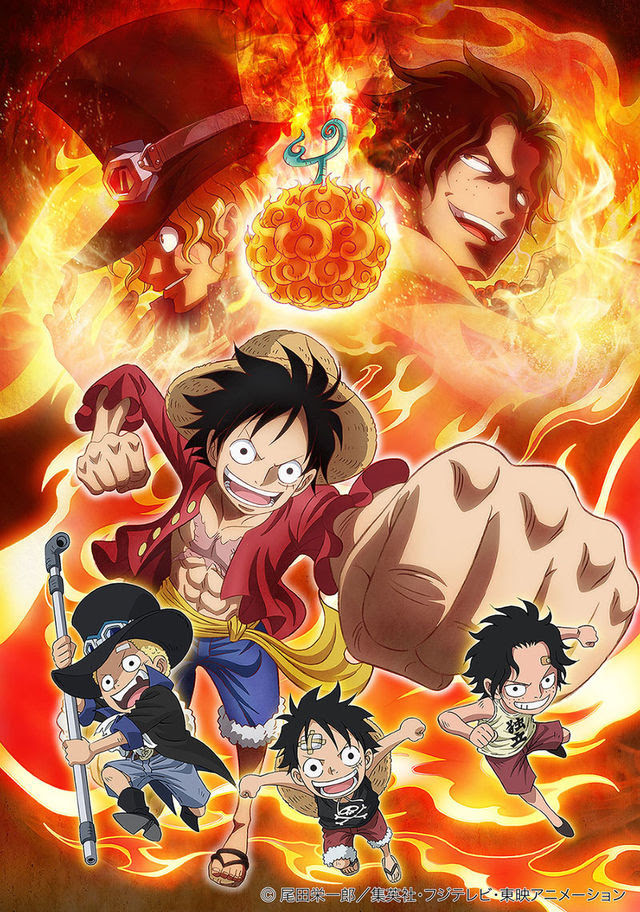 at August 11, 2015 No comments:
Email ThisBlogThis!Share to TwitterShare to FacebookShare to Pinterest
Labels: Anime, One Piece

Animation studio TMS Entertainment began streaming the third short in Dededen, its new originalanime with Seibu Railways, on Sunday. The anime celebrates both the 50th anniversary of TMS Entertainment and the 100th anniversary of Seibu Railways. TMS Entertainment happens to be located near the Araiyakushimae Station on the Seibu Shinjuku Line.
The studio streamed the first episode in March, and the second episode in June.
The anime follows the daily life of the main lead Amoru Tokorozawa and the railway. TMS plans to make five episodes, each 75 seconds long. The anime is running on the trains' onboard SmileVision screens, as well as on the Smile StationVision screens around major stations from February 23 to December 31.
Hiro Kaburaki is directing the anime with Norihiro Naganuma, his assistant director on Kimi ni Todoke - From Me to You, My Little Monster, and Hozuki's Coolheadedness. Kayoko Ishikawa(Aikatsu! design works) designed the characters, and S.E.N.S. (Kimi ni Todoke - From Me to You,xxxHOLiC, Ore Monogatari!!) scored the music.
at August 11, 2015 No comments:
Email ThisBlogThis!Share to TwitterShare to FacebookShare to Pinterest
Labels: Anime

Couldn't make it to the show? GameSpot has you covered with some photos of the amazing cosplay at the event. Check out our gallery below!