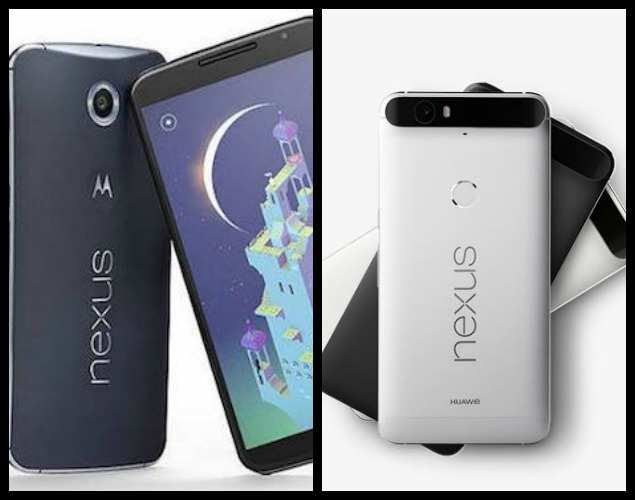 For the first time, Google unveiled not one but two Nexus smartphones as part of its new smartphone line-up. Perhaps paying heed to feedback from Nexus fans who wanted a smaller device, the search giant launched the Nexus 5X in addition to the big-screen device -- Nexus 6P. Successor to the Nexus 6, which was not as popular as its predecessors because of a higher price, giant 6-inch display and some manufacturing defects, the Nexus 6P looks like a better phone, at least on paper. We take a look at what differentiates the Nexus 6P from the Nexus 6.
1.

Nexus 6P will be the first smartphone to have the latest version of Android, Marshmallow. On the other hand, the Android Lollipop-running Nexus 6 will get Android 6.0 (Marshmallow) starting next week via an over-the-air update, Google has said.
3.

Below the rear camera of Nexus 6P is the Nexus Imprint fingerprint sensor, which Google claims can recognize fingerprints in less than 600 milliseconds. It will not only unlock the handset, but also authenticate Android Pay payments and app downloads; it will also work with other apps. Nexus 6, on the other hand, does not have a fingerprint sensor.
4.

Nexus 6P packs the new 2GHz octa-core Snapdragon 810 processor, which powers smartphones like HTC One M9. However, it appears that it uses the version 2.1 of the chip which may address the heating problems associated with the original chip. On the other hand, Nexus 6 runs on the 2.7GHz quad-core Snapdragon 805 quad-core processor. Both smartphones, however, come with 3GB of RAM.
5.

Google’s new Nexus 6P smartphone features the new USB Type C connector for charging and data transfer. This connector cable is backwards-reversible, which means that it can be inserted into the port from either side, just like with Apple’s Lightning cable. This is new standard for devices and supports faster file transfer and battery charging.
6.

Nexus 6P sports a 12.3MP camera with dual-LED flash on the back which appears to be smaller than Nexus 6’s 13MP camera. However, the Sony sensor has rather big 1.55 micron pixels, which capture 90% more light than Nexus 6’s sensor in order to deliver better photos under lowlight conditions. It can record high-resolution 4K videos (2160p at 30fps), as well as slow-mo videos at 240fps. However, Nexus 6 has Optical Image Stabilization for blur-free photos and videos, which is missing in Nexus 6P. The Nexus 6P has an 8MP front camera while the Nexus 6 has a smaller 2MP camera sensor for selfies.
7.

There is no word on the India pricing of 64GB Nexus 6P but it is likely to be priced under Rs 45,000, whereas the Nexus 5 model with same storage capacity can be purchased for around Rs 35,000 at present.
10.

The Nexus 6P smartphone has been manufactured by Chinese device-maker Huawei while Nexus 6 was made by Lenovo-owned Motorola.
at October 01, 2015
Email ThisBlogThis!Share to TwitterShare to FacebookShare to Pinterest
Labels: news, phone, technology