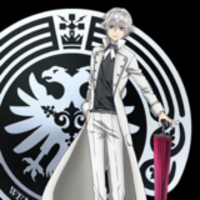 K: Return of Kings is the sequel to the 2012 TV anime, K. Like its predecessor, K: Return of Kings is directed by Shingo Suzuki and features animation by GoHands. It is licensed for distribution in North America by Viz.
at September 13, 2015
Email ThisBlogThis!Share to TwitterShare to FacebookShare to Pinterest
Labels: Anime, news