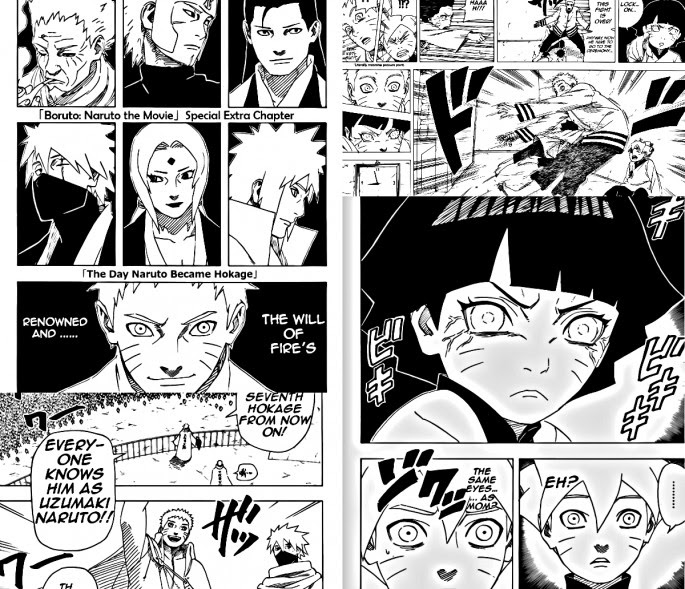 After days of speculating whether Himawari really awakened the Byakugan or it was just one bad dream for Naruto, the full English version of the Naruto Hokage One-Shot Manga is now available online on Tumblr (Part 1 / Part 2) to answer everybody's question.
On the day Naruto was about to be officially introduced as the 7th Hokage of Konoha, the legendary shinobi couldn't make it in his big day, and his then four-year old daughter has to be blamed for that.
Himawari indeed activated the Hyuga clan's powerful dojutso, the Byakugan, after Boruto drove her to complete madness for ripping off her stuffed toy's head. Himawari, blinded by her rage, launched a gentle fist attack towards his brother but hit an intervening Naruto instead, knocking his father unconscious with one single blow in his chakra points.
With the 7th Hokage's inauguration in jeopardy following Naruto's fate at the hands of his daughter, Kakashi and Shikamaru hatched a plan by asking Konahomaru to use his transformation jutsu and disguise as Naruto at the event.
The plan worked as Konahamaru pulled off a detailed transformation that left no one in suspicion, except his senpais. Back at Naruto's residence, Hinata found his husband lying on the ground while Himawari continued her pursuit of Boruto, who learned the terrifying side of his sister the hard way.
Naruto may have missed the biggest moment of his life as he has always been dreaming of becoming a Hokage since he was a child, but he nevertheless got pretty good consolation from all of that: his daughter now has a Byakugan.
at August 10, 2015
Email ThisBlogThis!Share to TwitterShare to FacebookShare to Pinterest
Labels: Anime, Naruto