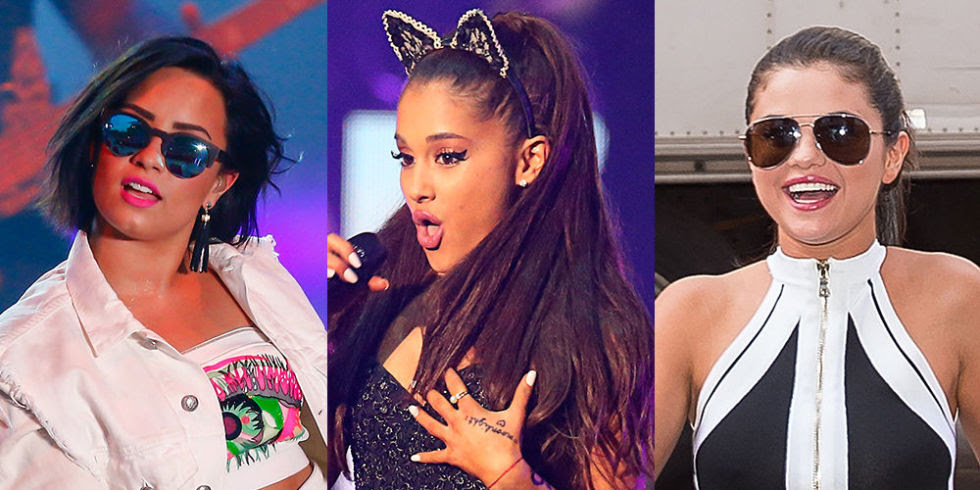 We're still loving 'One Last Time', obsessed with 'Cool For The Summer' and gettin' down to 'Good For You'; but now Ariana Grande, Demi Lovato and Selena Gomez have announced the titles of their new singles at the iHeartMedia Music Summit ALL AT ONCE.
So, in potentially our laziest (or most time-efficient, whichever way you wanna look at it) move to date we've decided to tell you about 'em all at once, too. Why write three articles when you can write one, eh? It gives us more time to snack and Google 'Niall Horan cute and funny moments.'
#Lazyjournos.

GIF
So here's the deal - this iHeartMedia Music Summit thingy in California's basically an excuse for loads of labels and their artists to showcase what they've got coming up next. We've already seen Nick Jonas perform a bit of his never-before-heard new single 'Under You' at the fancy Universal Music event; and now Demi, Ari and Selena have announced details of their new tunes. Hooray.
Basically, Selena's following up her A$AP Rocky collab 'Good For You' with second Revival single 'Same Old Love' (ooh), while Demi's next track's apparently called 'Confident' (wit woo).
Meanwhile, it's being reported that the first single taken from Ariana's Moonlight album will be 'Focus On Me.' Remember, that title she teased as a big ol' hint on Instagram with this pic and the capiton 'by "focus" i meant "focus on me"' [sic] a month ago?
Yup, that one.
at August 07, 2015
Email ThisBlogThis!Share to TwitterShare to FacebookShare to Pinterest
Labels: Hollywood, Selena Gomez