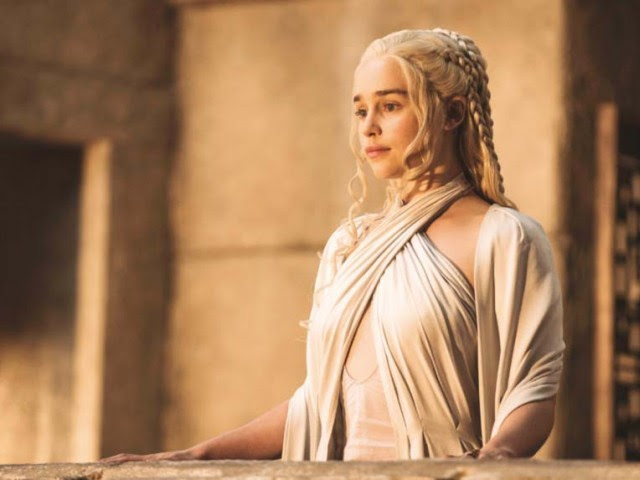 Game of Thrones has always been a show that elicits extreme reactions from its fans, and as the seasons have progressed, it has only increased in its divisiveness. On the one hand, there is the epic scope of its storytelling, the nuanced insight into deplorable characters and the fascinating way it explores themes of morality, war and power. And on the other hand is the over-the-top violence and nudity, which in recent seasons has combined into gratuitous and unnecessary instances of sexual violence. The show’s fifth season, which recently concluded, amplifies both these aspects.
If there was an overarching theme to this season, it was how difficult it is to retain power once you have it. In their disparate storylines, Cersei Lannister (Lena Headey), Jon Snow (Kit Harrington) and Daenerys Targaryen (Emilia Clarke) all struggle with the power they have suddenly acquired: Cersei finally rules at King’s Landing, with her young son merely a puppet whose strings she can easily pull, Jon Snow is unexpectedly pushed into a leadership position at the Night’s Watch, where he has to contend with the growing threat of the White Walkers, and Daenerys struggles to maintain some semblance of order in Meereen in the aftermath of her abolition of slavery. All three character arcs go in wildly different directions but all three are hugely satisfying to watch. Both Daenerys and Jon learn, over the course of the season, that having good intentions and idealistic notions doesn’t always translate into mass popularity or effective governance, while Cersei finds out how alliances to maintain power can sometimes backfire horrifically.
This season also has one of the most highly-anticipated character interactions in the history of the show — Daenerys finally meets Tyrion Lannister (Peter Dinklage) as he travels across the Narrow Sea to see her. The meeting is everything a fan of the show hoped for — her no-nonsense idealism and his sardonic witticisms clash perfectly as both bond over politics and personal issues. The season also boasts its most breath-taking and thrilling battles to date, with all the necessary twists and turns finally bringing to a head the White Walker storyline.
In contrast to these positives was this season’s infuriating treatment of women and the blasé way in which it meted out sexual violence, including to fan favourite Sansa Stark. In a storyline the showrunners changed from the books (written by George RR Martin) specifically for her character, Sansa is married to the sadistic Ramsay Bolton, who rapes her on their wedding night and continues to assault her throughout the season. The storyline caused great controversy amongst the online community and for good reason — it’s not only the violence that has become too much to stomach, it’s the fact that the storyline was doubly redundant. In the past seasons, the show has already established (in gruesome detail) the depths of Ramsay’s depravity, and Sansa has already been in a position where she was subjected to abuse (lest anyone forgets Joffrey), so the storyline served no purpose other than to incite outrage.
The season was also a disappointment in some other storylines which had a great deal of potential but were a huge let-down. The biggest was the Dorne arc in which Jamie goes to Dorne to rescue his daughter-slash-niece. The arc was supposed to highlight the Sand Snakes, a group of female warriors, but it depicted them as unintelligent women bent on revenge. The Stannis storyline was also clumsily executed, with a focus on shocking twists instead of nuanced character development. Both are examples of producers taking great liberties with the source material. With the finale ending at the same place the latest book in the series ends, the next season will plausibly include more improvisation on the  producers’ part.
at July 06, 2015
Email ThisBlogThis!Share to TwitterShare to FacebookShare to Pinterest
Labels: Game Of Thrones