The Best App Uninstaller for Android 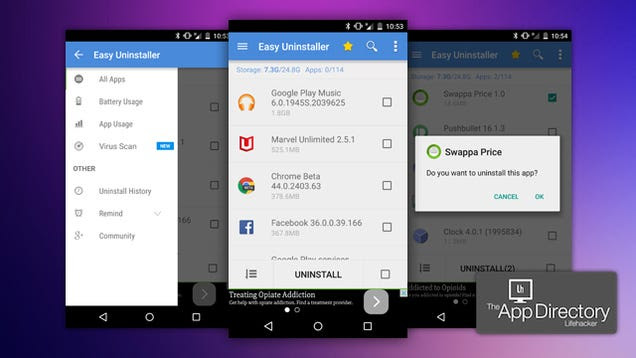 Installing apps is easy on Android. So easy that you can end up with a ton that you don’t need over time. Rather than tediously paging through every app to uninstall them one by one, we recommend Easy Uninstaller. This app allows you to uninstall several apps at once, sort them by size, and even clean up any junk files left behind.

Even without all the bells and whistles, Easy Uninstaller does its fundamental job well. You’re presented with a list of apps, as well as how much storage space they’re taking up on your phone. Simply check the boxes next to the apps that you want to uninstall and Easy Uninstaller will run through them, one by one. Due to the way Android handles app uninstallations, you’ll still need to confirm each one individually, but the process is much quicker than going through the usual Settings app. Easy Uninstaller will even keep a history of the apps that you uninstall if you want to find them again.
The extras make it stand out, however. You can set the app to remind you on a regular basis, such as every week or month, to clear out unused apps. Alternatively, you can get a reminder when your free storage space drops below a certain percent of your total storage. You can also use the built in tracker to find out which apps use up your battery, or which apps you use often enough to keep.

Where It Falls Short

While the battery and usage trackers are handy, they can themselves be a battery drain. While this might be useful occasionally, chances are you already know which apps you use regularly. Android also has its own battery usage tracker, so this feature is a little redundant. It also can’t uninstall or disable any system-level apps that come preinstalled on your device. You can disable them through the Settings app, but it’s still the normal hassle.

While Easy Uninstaller is more than serviceable for the non-rooted crowd, if you’re a root user,Titanium Backup is handy to have around if you have root access. In addition to the usual backup features, it can also uninstall system-level apps if you want to get rid of any carrier-branded junk or bloatware.
Outside of root apps, most of the competition around app uninstallers is less about doing batch uninstalls better, and more about which app has the least junk. For example, Easy Uninstaller advertises a “virus scanner” which you probably don’t need, though the other extras it has still push it to our top pick. On the other hand, Uninstaller can also batch uninstall apps without any extra frills and also doesn’t pack any extra crap features or “offers.” System App Remover similarly can uninstall system apps, though if you’re using Titanium Backup, it’s a bit redundant.
at July 07, 2015
Email ThisBlogThis!Share to TwitterShare to FacebookShare to Pinterest
Labels: Android