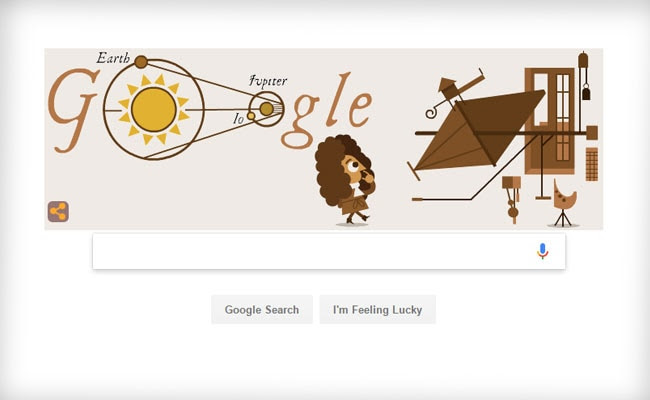 To celebrate the discovery of the speed of light by Ole Romer, Google came up with an animated Google Doodle which depicts what led the astronomer to the historic discovery.
Today's google doodle shows how the study and the discovery came into being.

Roemer began his research decades later in 1673 when he noticed the time elapse between the eclipses of a Jupiter moon called Io, which Galileo had discovered in 1610.
By monitoring the time difference, Roemer estimated light seems to take about 10 to 11 minutes to cross a distance equal to the half-diametre of the Earth's orbit around the Sun. This means that light travels at about 200,000,000 metres per second, which is around 26 per cent below the established speed.
The Royal Observatory in Paris, for whom Romer was doing research works, wasn't convinced with his conclusions. When other philosophers of the period, such as Christiaan Huygens and Isaac Newton backed the theory, it started gaining support.
It was finally confirmed nearly two decades after Romer's death, when English astronomer James Bradley in 1728 discovered the "aberration" of starlight and a speed of 295,000,000 metres per second for light.
at December 06, 2016 No comments:
Email ThisBlogThis!Share to TwitterShare to FacebookShare to Pinterest
Labels: google, news
Newer Posts Older Posts Home
Subscribe to: Posts (Atom)