Prior to the TV premiere of the new anime series KIZNAIVER on April 9, the advance screening event for its first and second episode was held at the United Cinema Toyosu in Tokyo on March 27. After the screening, two main voice actors of the show, Yuki Kaji (Katsuhira Agata) and Hibiku Yamamura (Noriko Sonozaki) appeared on the stage, offering a talk including spoilers. Check what they talked about the show below.
KIZNAIVER will be exclusively airing on Crunchyroll starting Saturday, April 9 at 8:30am PST for members in the following territories: The Americas, the Middle East and Africa, Australia and New Zealand, and English speaking Europe (United Kingdom, Ireland, the Nordics), with more TBA.
Yuki Kaji and Hibiku Yamamura on the stage 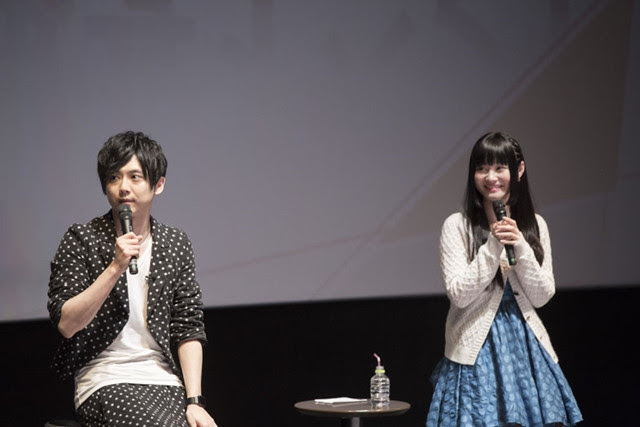 Kaji said, “I've watched the episodes together with you from a back seat. Watching them on a big screen
added more happiness, and I am deeply moved that the broadcast will finally start,” then Yamamura added,
“This the first public screening of the first two episodes. I also watched them from a back seat with a
beating heart.”
This event was also live-broadcasted to SAKURA-CON in Seattle and “Anime BOSTON” in Boston, the
United States. It was 6:00 am in the former and 3:00 am in the latter. Though it was very late night, the
audience in both venues reportedly enjoyed the show very positively. It became an event to unite the world
through “KIZUNA.”
Kaji and Yamamura's impressions on the first two episodes are?
Kaji: “KIZNAIVER has very unique world settings and a great number of characters, and also contains a lot
of information. But by watching the first and second episode, I believe your understanding is getting deeper.
I wonder how the story would go, I think it is going to be a very enjoyable show.”
Yamamura: “This show has very complex settings, but I felt it was smoothly delivered. I think I was able
to understand it with fun.”
Kaji: “And…, the visuals were very beautiful! Trigger's art works were so astonishing that still looked amazing
on a big screen. The music was also excellent. I have been a personal fan of the composer Yuuki Hayashi, so
it is my pleasure to work with him on the same show.”
In this new anime series, each characters have their own secret. In order to avoid the spoilers, the cast
members could not talk about it much before its broadcast debut. But since the audience at this event
already saw the first two episodes, Kaji and Yamamura were allowed to talk more freely.
Kaji: “Yamamura-san, when did the staff reveal the mystery of Noriko Sonozaki to you?”
Yamamura: “In the third episode. I had to voice the character without knowing the answer till then. The
director finally explained her detailed background information to me at the third episode's session. Then
it made all sense and I was able to understand his suggestions on my acting since the first episode.“
Kaji: “I see. Actually, our voice recording sessions are soon reaching the final episode. But there are still
more things that have not been revealed to us yet. Yamamura-san is the only cast member who knows the
secret of KIZNAIVER… Including that it is difficult to guess how the next story turns out, I have really enjoyed
the recording sessions, thinking this is a fun of joining an original series.”
One of the highlights both of them pointed out was a detailed scene that featured Gomorin, the Yuru-Chara of
Sugomori-city.
Yamamura: “In the beginning scene that Gomorin was surrounded by children, the egg on its head was cracked.
Please check the scene on TV!”
One question was selected from the entries collected beforehand.
Q: “Among the characters of KIZNAIVER, who do you want to connect with by the Kizuna System?”
The story follows seven boys and girls who are forced to connect by the Kizuna System that share wounds and
pain among them. Who was the two's choice for their Kizuna partner?
Yamamura: “I don't want to connect with Katsuhira (Kaji's character), no no.”
Kaji: “Really?!”
Yamamura “Because the system gives its users no pain, they tend to get punched so easily. Though I feel no
pain at all, it may be delivered to others.”
Kaji: “Well, I would choose Chidori... She is so cute, and also a very nice girl.”
Yamamura: “If you say so, I prefer Chidori, too. If I let her know that I become a Kiznaiver, she will do her
best not to reach the pain to me!”
In the end, they told the audience the highlights of the upcoming episodes after the second.
Kaji: “After watching the first two episodes, I think you can understand the Kizuna System and each characters'
personality well, and also can expect how the story of KIZNAIVER will expand. In addition, as an adolescence story,
episodes about the characters' love and friendship will be also told. How those elements will be connected with
“Kizu?” I will be happy if you can enjoy those parts of the story. “
Yamamura: “Some characters have not appeared yet. I hope you will also enjoy how they will make their
appearances in the story.”
It was a successful event that delivered high expectations for KIZNAIVER at all three venues in Tokyo, Boston and Seattle. 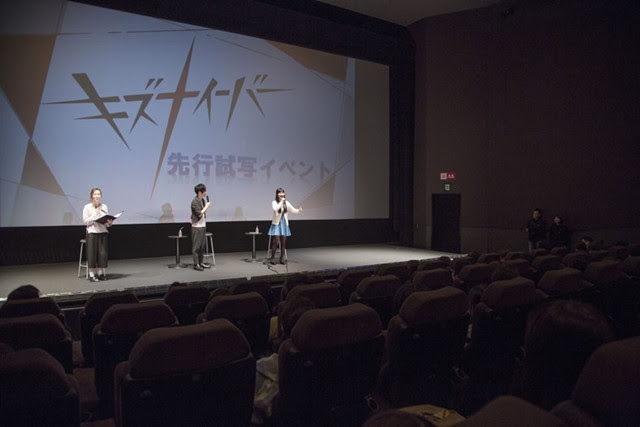 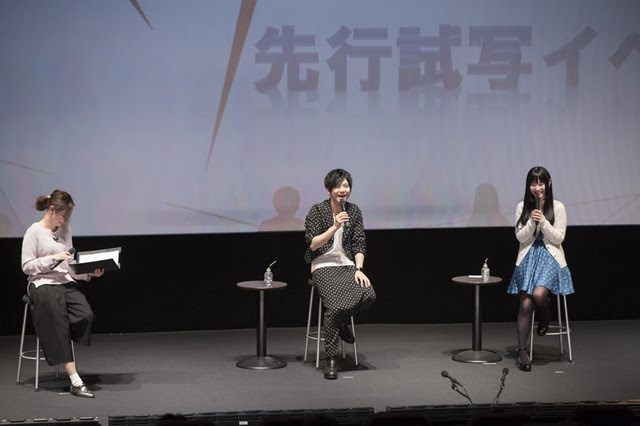 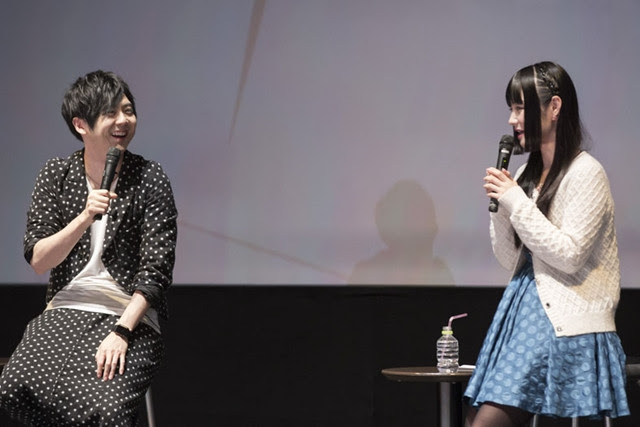 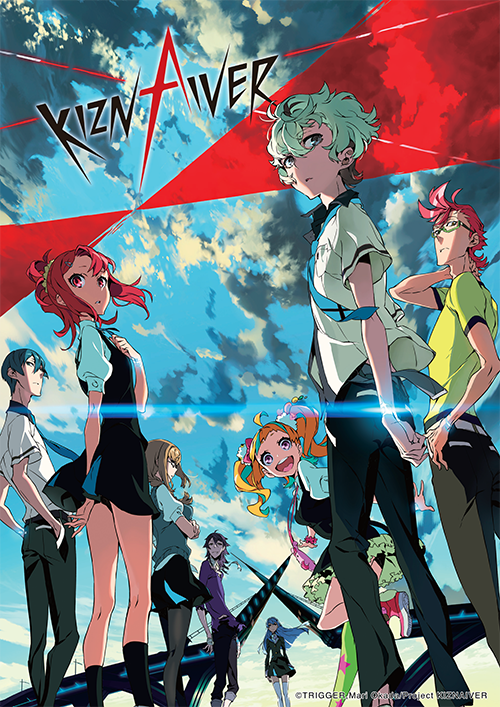 at April 04, 2016 No comments:
Email ThisBlogThis!Share to TwitterShare to FacebookShare to Pinterest
Labels: Anime, news

The first episode of Ace Attorney the anime has aired in Japan and also recently aired in America this past Saturday on April 2nd. More episodes will be coming very soon for those subscribed to Crunchyroll, where they can view the original subtitled anime episodes each week on the streaming network.
Gamespot picked up the news that the anime based on Capcom's popular handheld games has recently gone live. They mentioned that each subsequent episode will go live on the weekend at around 4:00am PST and 7:00am EST.
The news about the Ace Attorney anime was originally revealed to the Crunchyroll audience through a post by the brand manager, Victoria Holden, on the officialCrunchyroll forums. Holden explained that the first episode is available and more would be arriving each week to Crunchyroll members worldwide, excluding Asia.
There aren't any details on the forum about the show being made available, but Capcom community manager Kellen Haney went into a bit more detail about the anime based on the popular Nintendo 3DS series on the Capcom Unity blog. He explains that over in Japan the series is known as Gyakuten Saiban, which directly translates into Turnabout Trial here in the West. It's also revealed that since the Ace Attorney show will be subtitled instead of dubbed, the characters will have their original Japanese names, so you can see the translation of the names below between the Japanese and Western versions.
Naruhodo Ryuichi (Phoenix Wright)
Mitsurugi Reiji (Miles Edgeworth)
Ayasato Mayoi (Maya Fey)
Ayasato Chihiro (Mia Fey)
Yahari Masashi (Larry Butz)
Itonokogiri Keisuke (Detective Gumshoe)
Auchi Takefumi (Winston Payne)
The series will follow Ryuichi (Phoenix Wright), the prosecutor, and a few of the friends, foes, allies and rivals that he will encounter as he attempts to solve a case while combing through the evidence and interviewing suspects.
Fans are fairly excited about the Ace Attorney anime, but some are a bit disappointed that they'll have to watch it with subtitles instead of experiencing it through dubbing. One of the reasons some don't like the subtitles is that the names, locations, and some of the themes have completely changed from what some gamers might be used to. In the localized versions of Ace Attorney the setting takes place in America and references such as food and locations have been acculturated for Western audiences.
In this case, it may make it a bit difficult for long time fans of Ace Attorney to get into the show unless they're familiar with some of the regional differences present in the original Japanese version. This is one of the dangers of changing things a bit too much during the localization process where a lot of the story, character, and location nuances are altered to fit a different audience. In this case, so much has changed it may require a little extra effort from Western audiences to really get into the show and catch all the references.
The anime has arrived just in time to help promote the upcoming release of Ace Attorney 6, which is due for release in Japan on June 6th. The North American and European release hasn't been set yet, but expect it to come soon.
at April 04, 2016 No comments:
Email ThisBlogThis!Share to TwitterShare to FacebookShare to Pinterest
Labels: Anime, news
Newer Posts Older Posts Home
Subscribe to: Posts (Atom)