Wagakki Band is keeping busy this summer! Even though they released a video just two weeks ago, a new one has just appeared today! This time, it’s for “Hangeki no Yaiba,” the theme song for the new Attack on Titan series produced from dTV. That’s right, now you can get your Wagakki Band fix and your Attack on Titan spin-off fix all in one place!
The video features the band performing in a crumbling church and wielding weapons that look like they were taken straight from the set of the show. The song itself features Wagakki Band’s distinctive sound and it sure to get your blood pumping. Check it out below and blast it while you get ready to fight some giants!
Don’t worry! Your speakers aren’t broken — the first 18 seconds are silent. While it might seem like an odd choice for a music video, it certainly does build up the tension. Though we’ve seen the band waving swords around before, we’re pretty sure this is the first time we’ve seen any of them anywhere near some 3-D maneuver gear. Sadly, we don’t actually get to see anyone wearing the gear, but it does look pretty cool on the floor behind them.
▼ Did their parents never tell them not to throw their clothes on the ground?!

Unfortunately, it looks as if they’re only releasing the short version for now, but if you’re looking for more information on the Attack on Titan mini-series, there’s an official trailer as well. It also features a few snippets of the new Wagakki Band song.
In addition to being featured as the theme song for the show, “Hangeki no Yaiba” will also appear on their new album Yasou Emaki, to be released in a few weeks on September 2. If you’re burning to see the full-length video, DVD and Blu-Ray versions of the album will feature it and a number of other videos as well.
at August 16, 2015 1 comment:
Email ThisBlogThis!Share to TwitterShare to FacebookShare to Pinterest
Labels: Anime, technology

Attack on Titan Begins Its Trek Across the US This September

As a shameless Japanese cinema nerd, I’m deliriously excited about director Shinji Higuchi’s live-action epic Attack on Titan. Although to movie hit theaters in Japan not too long ago, those of us who reside in the States won’t have to wait forever to catch the flick on the big screen. The snazzy folks at FUNimation Entertainment are bringing both parts to the US beginning next month.
The first installment of Attack on Titan should hit a theater in your neck of the woods on September 30. And instead of making everyone wait an unnecessarily long time for the conclusion, part two will arrive on October 20. The boys and girls at FUNimation are just cool like that.
For those who are late to the party, here’s a synopsis.
The sudden arrival of the Titans–mysterious, gigantic humanoid creatures who devour human beings one after the other–brings mankind to the brink of extinction. Fast-forward more than 100 years later. What remains of the human population now live in relative peace behind massive walls that were erected to defend themselves against the Titans. Yet, once again, that peace is shattered when a Titan measuring over 50 meters tall smashes through the wall, allowing a horde of other Titans to enter. The protagonist, Eren, had been resigned to a life confined behind these walls. Nothing I do would make a difference, he thought. But when he joins the “Outer Wall Restoration Team” set up to fight against the Titans, he is reunited with Mikasa, a childhood friend and someone he had long rued not being able to save. The new recruits embark on a mission to obtain explosives, which had become rare and precious, before getting past the waves of Titans to plug the gaping hole in the wall, with humanity’s survival on the line. Will there be a future for Eren and Mikasa and for mankind itself?
To top everything off, FUNimation has released a nifty trailer for the US release of Attack on Titanparts one and two. You can find that mind-blowing clip positioned down below. 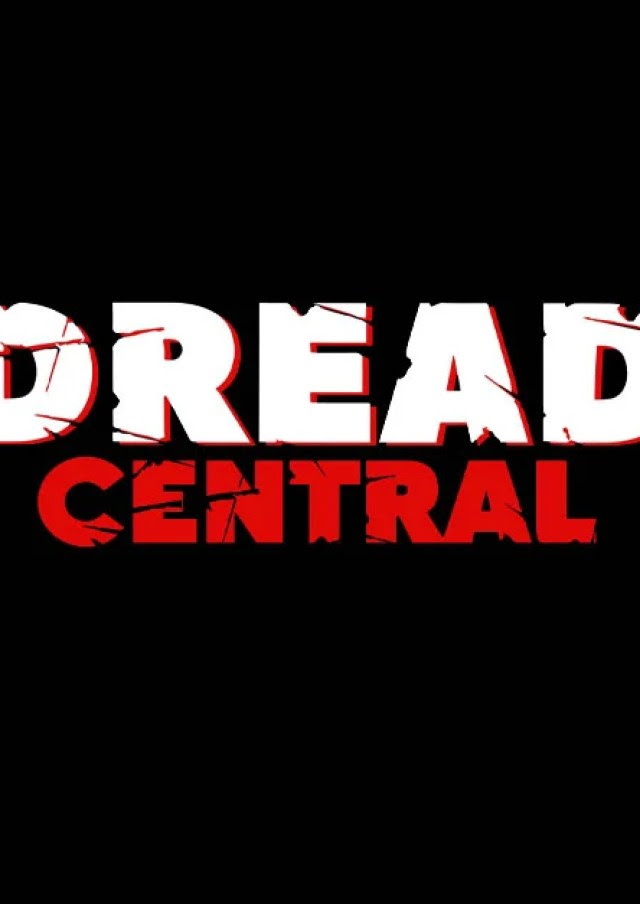 at August 16, 2015 No comments:
Email ThisBlogThis!Share to TwitterShare to FacebookShare to Pinterest
Labels: Anime, news

After digging into Punk Hazard last month, a new One Piece: Pirate Warriors 3 trailer is here to preview the Dressrosa arc.
One Piece: Pirate Warriors 3 hits PlayStation 3, PlayStation 4, PS Vita, and PC in the Americas on August 25, followed by Europe, Middle East, and Australasia on August 28.
at August 16, 2015 No comments:
Email ThisBlogThis!Share to TwitterShare to FacebookShare to Pinterest
Labels: Anime, news, One Piece

Following the recent release of the Boruto movie in Japan, which is a follow on to the hugely successful Naruto series, it turns out that the new characters featured in the movie will join in the fun on Naruto Shippuden Ultimate Ninja Storm 4.
In a new trailer (shown below) we see both Boruto Uzumaki and Sarada Uchiha (shown above) team up to take down various foes in the upcoming game, these being the children of both Naruto and Sasuke respectively.
These characters come from the new Boruto movie, which is an attempt by the Narutoseries’ creator Masashi Kishimoto to reinvigorate its narrative and keep new audiences interested.
As the Naruto manga finished in November of last year, Kishimoto is trying to show how a new generation of characters can carry on the legacy.
While a few have dismissed the name of the new character of Boruto as being a bit goofy, that is a pretty shallow appraisal.
As both narratively and in terms of its characterization the new movie definitely holds true to what made the Naruto franchise the global juggernaut it is today.
In regards to Ultimate Ninja Storm 4, while this will be the last Naruto game developed by CyberConnect2 they seem to be doing their utmost to make their last Naruto game one to remember.
Set for a release next February on PS4, Xbox One and PC the game is having a major graphical overhaul and is also branching out in terms of its core functionality.
In terms of the latter, this means that players will be able to switch team members out mid-combat. This is meant to help free up the game somewhat as well as increase the capacity for player tactics.
At the very least with the inclusion of characters from Boruto this new game will be nothing if not comprehensive.
at August 16, 2015 No comments:
Email ThisBlogThis!Share to TwitterShare to FacebookShare to Pinterest
Labels: Anime, gaming, Naruto, news

Anime fans who are specifically interested in the voice acting side of the business, or fervent fans of particular voice actors, should add a new destination to their next trip to Tokyo: the SeiyuuMuseum (seiyū means voice actor), located in Sasazuka, Tokyo, west of Harajuku. It is affiliated with the voice acting studio 81produce and commemorates its 35th anniversary. 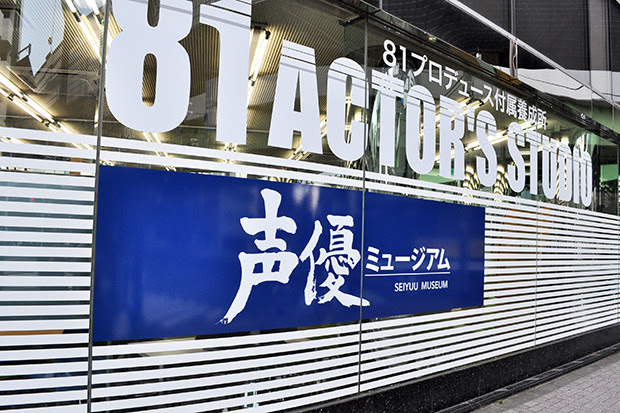 Inside, anime fans can find a wealth of scripts dating back over the five decades of Japanese televised animation history, including from hit shows such as Mobile Suit Gundam, One Piece, andChibi Maruko-chan. The museum also includes scripts from tokusatsu series and Japanese dubs of foreign series. 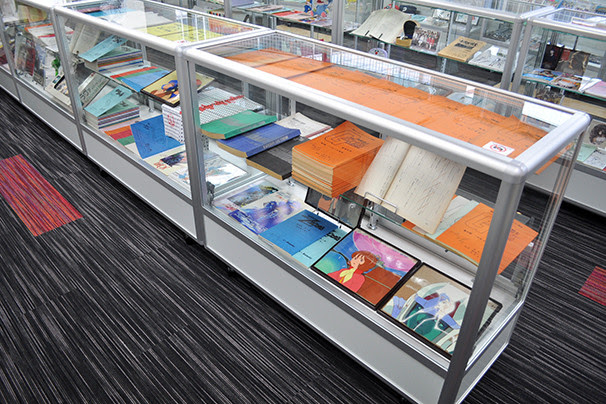 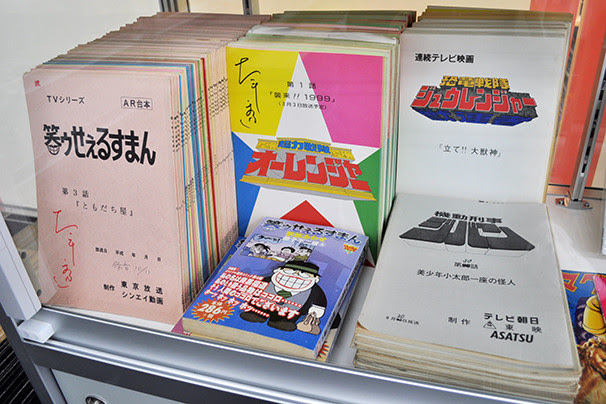 Scripts for The Laughing Salesman and the tokusatsu series Chōriki Sentai Ohranger, Kyōryū Sentai Zyuranger, and The Mobile Cop Jiban
Some of the scripts on display contain annotation from voice actors, such as where to breathe and how to deliver certain lines. Tōru Ōhira (Homer in the Japanese dub of The Simpsons), Hiroshi Ohtake (Parman No. 2 in Pāman) and Nachi Nozawa (the Japanese dubber for Bruce Willis) are among the actors represented. 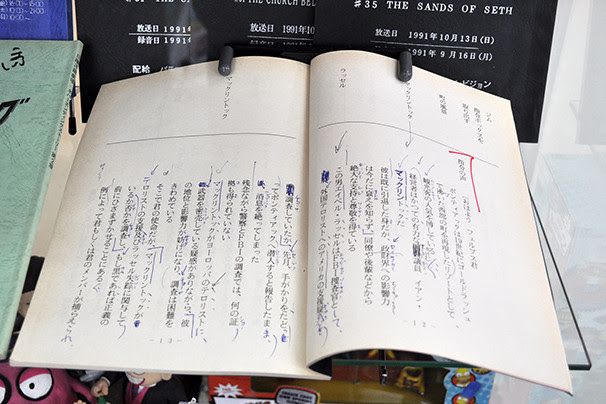 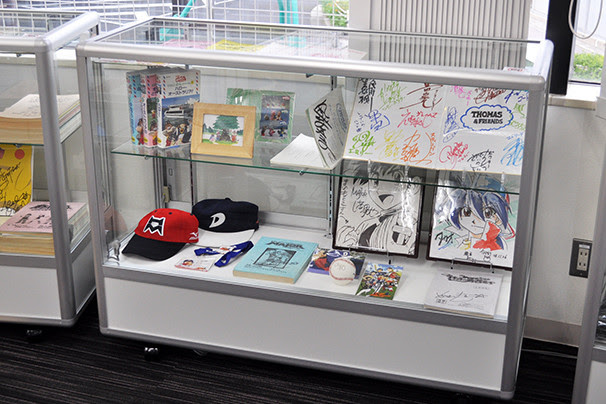 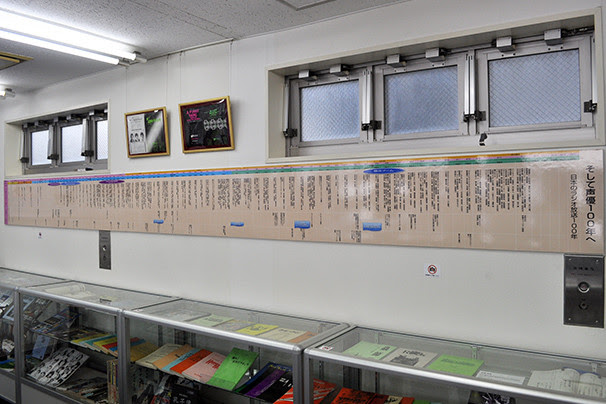 There are displays featuring the other side of many contemporary voice actors' careers — pop singing — including these exhibits of i☆Ris and Wake Up, Girls! (from the anime of the same name). 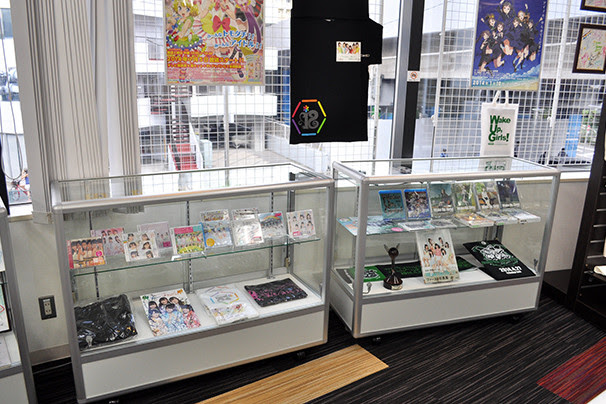 There is also a display on a new audio drama produced by 81produce that adapts Shidenkai no Taka ("Violet Lightning Hawk"), a World War II fighter pilot manga from 1963.
If this seems like a shrine to voice actors, the museum includes an actual Voice Actor Shrine. It venerates a Sony C-38B Condenser Microphone from Half HP Studio which has been breathed into by an estimated 60,000 voice actors since 1995. 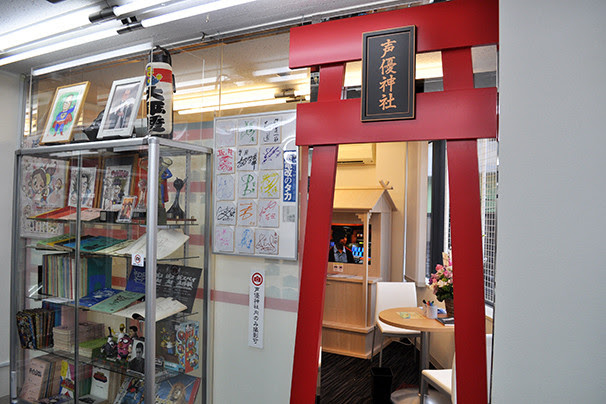 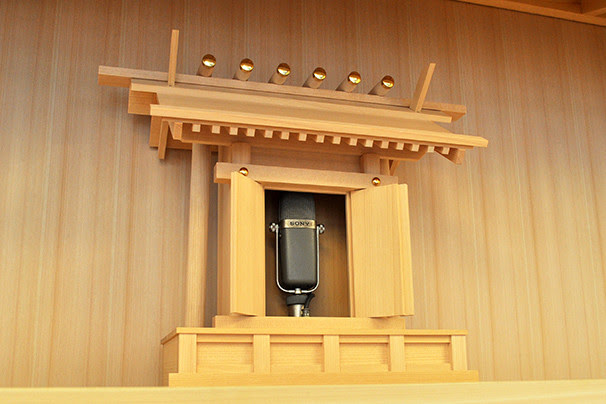 On the shrine's walls hang ema (wooden prayer tablets, although in this case they're paper) carrying messages from fans, voice actors, and other industry insiders. 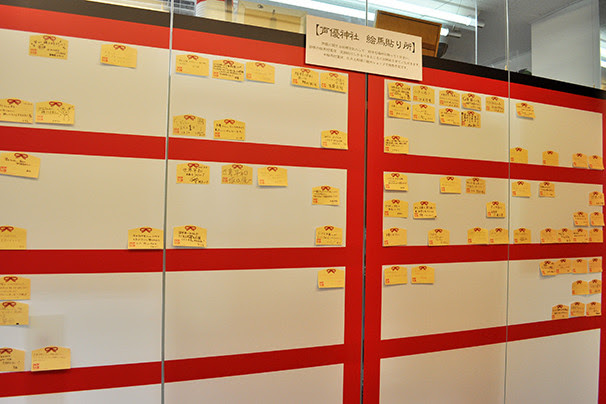 The museum also sells voice actor-related merchandise, like CDs and books. Seen here are T-shirts with original drawings by Takuya Eguchi (Takeo from My Love Story!!, Ryōma from Love Stage!!). 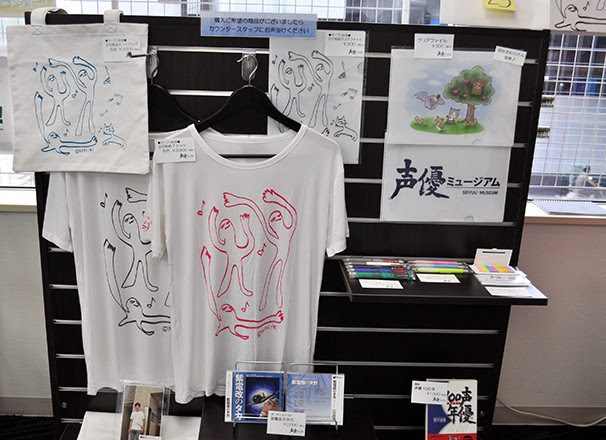 Finally, on the building's sixth floor (the museum is on the second floor), 81produce has opened 81 Live Salon, a performance space for voice actors to deliver script readings in. On August 8 and 9, it kicked off with a performance by Aimi Tanaka (Umaru from Himōto! Umaru-chan), Satowa Tanaka (Choroma and Masuyo in Kill la Kill), Katsuhiro Tokuishi, Yūki Yonai and Arthur Lounsbery(Kaito in High School Star Musical). 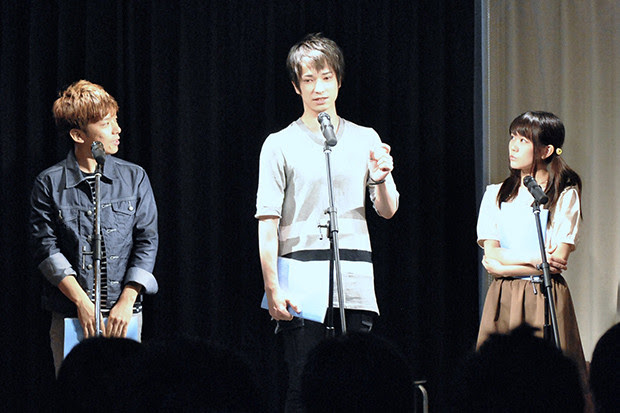 Left to right: Yonai, Lounsbery, Aimi Tanaka
The Seiyuu Museum is located at Shibuya Ward, Sasazuka 1-52-18. It is open from 11 AM to 4 PM from Tuesdays through Saturdays. Other anime-related museums in Tokyo include the Ghibli Museum in Mitaka and the Suginami Animation Museum in Ogikubo.
at August 16, 2015 No comments:
Email ThisBlogThis!Share to TwitterShare to FacebookShare to Pinterest
Labels: Anime, news, technology
Newer Posts Older Posts Home
Subscribe to: Posts (Atom)