Washington: Bollywood stars Amitabh Bachchan, Salman Khan and Akshay Kumar are among the world's top ten highest-paid actors in Forbes first global list of actors from Hollywood to Hong Kong and Bollywood.
Amitabh Bachchan and Salman Khan entered the list in joint seventh place, with estimated earnings of $33.5 million in the past year. Akshay Kumar follows behind in ninth place with $32.5 million.
Bollywood stars Shah Rukh Khan (18) and Ranbir Kapoor (30) with estimated earnings of $26 million and $15 million respectively, also made the Forbes list. 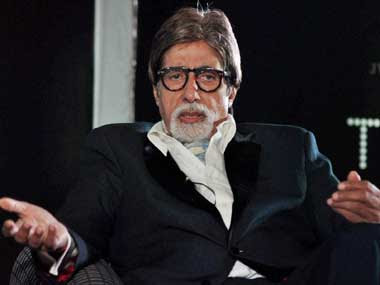 Amitabh Bachchan. PTI
Bollywood stalwart Amitabh Bachchan has starred in more than 150 movies in his 50 year career. He continues to earn top rupee for his roles in flicks such 2014's Bhoothnath Returns, Forbes noted.
One of India's biggest stars, Salman Khan, has appeared in some 80 movies since his 1989 breakout role Maine Pyar Kiya.
Bollywood superstar Akshay Kumar has appeared in some 150 movies since his 1992 breakthrough in Khiladi.
Shah Rukh Khan was described as "India's Leonardo DiCaprio". He earns from movies such as Happy New Year and Fan, as well as lucrative endorsements including Pan Masala.
"Indian actor Ranbir Kapoor is one of Bollywood's top male actors and joins the World's Highest-Paid Actors list for the first time.
He banks a decent pay check from movies such as Roy and Bombay Velvet, Forbes said.
Robert Downey Jr topped the list with estimated total earnings of $80 million thanks to the Iron Man franchise, while Jackie Chan came in a surprise second position with a $50 million pay packet.
Others among the top ten were Vin Diesel (3), Bradley Cooper (4), Adam Sandler (5), Tom Cruise (6), and Mark Wahlberg (10).
The 34 stars on Forbes' list earned a combined $941 million before taxes and fees between June 2014 and June 2015.
A separate list of highest-paid actresses will be published later this year.
at August 06, 2015 No comments:
Email ThisBlogThis!Share to TwitterShare to FacebookShare to Pinterest
Labels: Bollywood

BEVERLY HILLS, Calif. (AP) — Indian film star Priyanka Chopra says she was eager to add a U.S. TV series to her resume.
"It's like the golden age of television right now and I wanted to be part of that ... revolution," Chopra said of her role as a FBI recruit in ABC's new drama "Quantico." It debuts Sept. 27.
But she told the network that she didn't want to be cast for the color of her skin, what she looks like or where she's from, Chopra told a TV critics' meeting Tuesday. The goal was a worthy project that "gave me the respect of being an actor."
Chopra said she is glad to bring further diversity to ABC, which includes characters of various ethnicities in "Fresh Off the Boat," ''black-ish" and other series.
Since coming to America as a student, "I never saw anybody who looked like me on TV, and this was an opportunity for me to change that."
She plays Alex Parrish, an Indian-American whose fledgling FBI career and freedom are in jeopardy after a New York terrorist attack. It's a juicy role in a "smart show' that any actress would covet, she said.
Parrish is "Jason Bourne in female form," Chopra said.
Despite her new job, she has no intention of abandoning her film career back home.
"I love doing my Indian films, and it's amazing that I can balance both," Chopra said, labeling herself an effective multitasker. After this season wraps she'll jump back into a film.
TV's 15-hour-plus production days took her by surprise. So did being in the dark about her character and story lines until getting each script, in contrast to knowing how a movie begins and ends.
"They tell me nothing," she said of the producers. But she heard from a good source, Kevin Spacey, that's part of the charm of working in TV.
Spacey said during a master class that he never knows what "House of Cards" character Frank Underwood is up to until he reads it on the page.
"It keeps you on your toes," he told her.
at August 06, 2015 2 comments:
Email ThisBlogThis!Share to TwitterShare to FacebookShare to Pinterest
Labels: Bollywood, Hollywood, priyanka chopra

Taylor Swift’s next single will be…"Wildest Dreams".
The pop superstar shared the news with a tweet to her 61.6 million followers.
The announcement sent "Wildest Dreams" to the top of the real time Billboard + Twitter Trending 140 chart.
Taylor Swift Talks Rumored Kanye West Collab, Dating Mistakes With 'Vanity Fair'
The single follows her four previous singles from 1989 -- all of which reached the top 10 of the Billboard Hot 100 chart: "Shake It Off" (No. 1 for four weeks), "Blank Space" (No. 1 for seven weeks), "Style" (No. 6) and "Bad Blood" (No. 1). All four of those tunes also topped the Pop Songs airplay chart.
1989 has sold 5.1 million copies in the U.S., according to Nielsen Music and was 2014's best selling album (with 3.7 million sold last year). It is also 2015's best seller, so far, with another 1.4 million moved this year.
at August 06, 2015 7 comments:
Email ThisBlogThis!Share to TwitterShare to FacebookShare to Pinterest
Labels: Hollywood, Taylar Swift
Newer Posts Older Posts Home
Subscribe to: Posts (Atom)