Microsoft announced late Friday that it had enabled Xbox One game streaming to Windows 10 PCs and tablets. It also announced a few changes to the Xbox app on Windows 10.
Game streaming was previously available only to Xbox One preview program members. It allows you to remotely play an Xbox One—and, soon, via backwards compatibility functionality, Xbox 360—games on a Windows 10 PC or tablet. The console and PC must both be on the same network, and you will of course need an Xbox One controller attached to your PC. (Today, that is USB-based, but Microsoft recently announced a wireless adapter.)
Setup is simple enough: On the console, navigate to Settings, Preferences and make sure the option “Allow game streaming to other devices (beta)” is enabled. On your Windows 10 PC or tablet, connect an Xbox Wireless controller with USB cable and then launch the Xbox app and navigate to Connect and connect your Xbox One console. When you do, you will see a new Stream option for game streaming.

From here, you can launch and play Xbox One-based games form your PC or tablet. Oddly, you can’t actually use your console for anything else while you’re doing that. But Microsoft tells me this option can free up the TV the Xbox One is connected to, letting two or more people enjoy separate entertainment experiences (gaming and TV or whatever) on different screens.
In addition to enabling game streaming for everyone, Microsoft also announced some new features for the Xbox app on Windows 10:
Cross-platform party Chat. A new option called “Start a party (beta) will be found above the Friends list, providing a way to start a party chat or game chat with your Xbox friends across Xbox One and Windows 10.
My Games. The Xbox app will automatically discover Windows Store games (a curiously old-fashioned name) and many older traditional PC games and then add them automatically to your game collection in the app.  If a game is not automatically added, you can add it manually by selecting My games, Add a game from your PC.
Home. The Home view has been updated, providing easier access for game streaming quicker game launching from a Recently played list. The Featured games section has been updated so you can discover and install new and popular games available from the Store.
Profile. Now you can choose whether to use your avatar or gamerpic as how you’re represented to Friends. You can also customize your avatar, change your gamertag, gamerpic, and user color, and update your name sharing settings, under Customize.
Share with your friends. You can now upload local game clips and screenshots for Windows Store games to your shared collection on Xbox Live. To do so, navigate to Game DVR, On this PC, Share. You can now capture game clips and screenshots for non-Windows Store games and access them via Game DVR, On this PC, Open folder.
Xbox avatars. The Avatars app is being updated so you can take a virtual photo of your avatar and use that as your gamerpic.
Day One Experience. To make it easier for new PC gamers, the Xbox app will help users without Xbox gamertags to create a new account, get their own gamertag, and then use more a basic user experience so they can figure things out like the noobs that they are.
at July 20, 2015 No comments:
Email ThisBlogThis!Share to TwitterShare to FacebookShare to Pinterest
Labels: microsoft

A first look at Microsoft’s Cortana running on Android 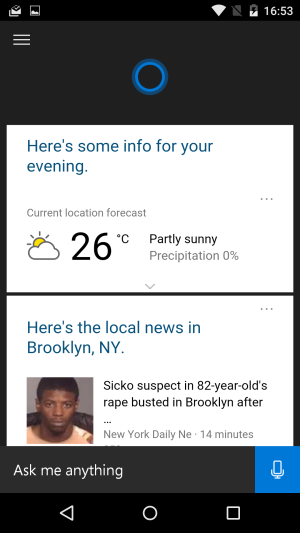 Microsoft promised this May that it was bringing Cortana to iOS and Android, confirming rumors from earlier in the year. The Android version leaked today—there's an APK floating around—and Microsoft has opened up an invitation-only beta to let people test the company's digital personal assistant for themselves, at least if they live in the US or China. To sign up to the beta you'll need one of a handful of recent Android handsets, and a Microsoft account that's linked to the Windows Insider program. In promoting its cross-platform software ambitions, Microsoft has said that its experiences will be mobile, following people from device to device, but best on Windows. The idea here is that Windows 10 users will use and depend on Cortana on their PCs, and hence will want her to be available on their phones, no matter which smartphone platform they use. On Windows and Windows Phone/Windows Mobile, Cortana can in principle be more deeply integrated—enabling, for example, "Hey Cortana" voice-based activation—but on Android and iOS she'll be "just" an app and accordingly constrained. That may be the principle, but for now, at least, Cortana on Android seems to be pretty close to Cortana in Windows 10, Windows Phone, and Windows 10 Mobile. Install the app and she asks for a ton of permissions, including the ability to send and read SMS messages, place calls, access contacts, calendars, and accounts, and more besides. Start her app and she looks near identical to her Windows 10 PC incarnation, and functionality seems to be very similar across Android, Windows 10, Windows Phone, and Windows 10 Mobile. Her core knowledge and configuration continues to be driven by the "Notebook," and she can give alerts and information about the same kinds of things: weather, places to eat, traffic conditions, warning you it's time to leave for an appointment, and so on and so forth. The range of capabilities can be extended by Microsoft at any time, as the majority of what Cortana does happens in the cloud, with Bing. 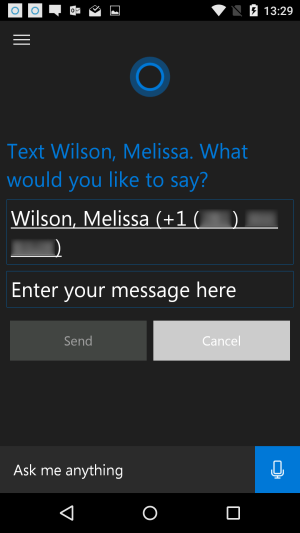 Similarly, her voice recognition is performed in the cloud, and performed as well as we've come to expect from her other platforms. Transcription quality is decent, and will only improve as more people start using her. There are a few gaps; she doesn't appear to be able to read e-mails, and so won't pick up things like package tracking numbers or flight info. She also can't listen for music. For the time being, at least, these features remain unique to Microsoft's platform. Likewise, the "Quiet Hours" functionality, during which incoming calls and messages are muted when busy or asleep, and the corresponding "Inner Circle" feature, which allows some calls to break through even during Quiet Hours, are only found on Microsoft's phone platform. Cortana on Android is also just an app, and lacks the kind of integration that Microsoft is experimenting with elsewhere. The Edge browser in Windows 10, for example, includes some Cortana functionality, with the digital assistant recognizing things like restaurant websites and offering additional information about them, and this has no equivalent on Android. While I've seen some complaints that she crashes a lot, I didn't have any issues like that on a Nexus 5 with Android 5.1. Even with these gaps, the result is, well, Cortana on Android. Everything appears to sync correctly with other platforms, and so she does more or less achieve the goal of providing a cross-platform experience. It's difficult to know which of the functional gaps are due to her beta status, and which are likely to be filled out as Microsoft improves her, but as things stand, Microsoft has achieved its "better on Windows" objective. Assessing the value of Cortana on Android remains trickier. For someone using Android and the broader Google ecosystem, the built-in Google Now is better integrated and more capable. If Cortana on Windows 10 turns out to be an important part of your daily life, the continuity that comes of sticking with Cortana may be valuable, but even that isn't immediately obvious; with Google Now providing direct equivalents to some Cortana features, and with others (such as appointments) being synced by your calendar anyway, many may find that the best experience comes from using both intelligent agents on their respective platforms; use Cortana when using your PC, but switch to Google Now on your phone. With most of Cortana's content delivered through the Web, it's not too surprising...
at July 20, 2015 No comments:
Email ThisBlogThis!Share to TwitterShare to FacebookShare to Pinterest
Labels: Android, microsoft
Newer Posts Older Posts Home
Subscribe to: Posts (Atom)